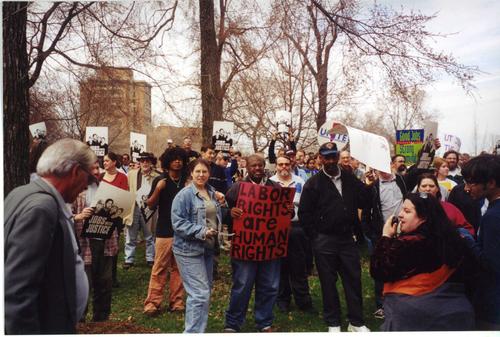 In early 1999, student activists from the Progressive Student Alliance at UTK (then known as the Alliance for Hope) along with some UTK faculty and community allies (particularly the labor-community group Jobs with Justice and the Tennessee Industrial Renewal Network) began planning a “living wage campaign” for UT workers.

A similar campaign was happening for Knoxville city employees, and many felt that University of Tennessee employees would benefit from a similar plan. An organization of campus staff called Campus Workers for a Living Wage formed so workers themselves could lead the struggle. Ultimately, CWLW became the United Campus Workers, an independent union of university staff employees.

In the past 10 years, UCW has affiliated with the Communications Workers of America, grown into an organization of over 1,900 higher education staff and faculty at Tennessee Board of Regents, Locally Governed Institutions (LGIs, or formerly TBR 4-year universities), and University of Tennessee schools, and won numerous victories in the everyday lives of the folks that keep Tennessee’s public institutions of higher education running.

2002 - Justice for Van Drivers, Back Pay after Furlough

2005 - Union Gets Active in State Capitol

2009 - Union Membership Grows at Tennessee Board of Regent Schools, Campaign to Save Higher Education Continues

2011- Fights on all fronts continue